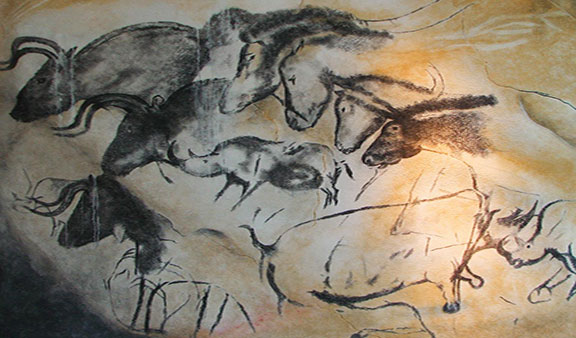 Posted at 20:42h in Prehistoric by artadmin 0 Comments
0 Likes

Humans make art. We do this for many reasons and with whatever technologies are available to us. Extremely old, non-representational ornamentation has been found across Africa. The oldest firmly-dated example is a collection of 82,000 year old Nassarius snail shells found in Morocco that are pierced and covered with red ochre. Wear patterns suggest that they may have been strung beads. Nassarius shell beads found in Israel may be more than 100,000 years old and in the Blombos cave in South Africa, pierced shells and small pieces of ochre (red Haematite) etched with simple geometric patterns have been found in a 75,000-year-old layer of sediment.

The oldest known representational imagery comes from the Aurignacian culture of the Upper Paleolithic period (Paleolithic means old stone age). Archaeological discoveries across a broad swath of Europe (especially Southern France, Northern Spain, and Swabia, in Germany) include over two hundred caves with spectacular Aurignacian paintings, drawings and sculpture that are among the earliest undisputed examples of representational image-making. The oldest of these is a 2.4-inch tall female figure carved out of mammoth ivory that was found in six fragments in the Hohle Fels cave near Schelklingen in southern Germany. It dates to 35,000 B.C.E.

The caves at Chauvet-Pont-d’Arc, Lascaux, Pech Merle, and Altamira contain the best known examples of pre-historic painting and drawing. Here are remarkably evocative renderings of animals and some humans that employ a complex mix of naturalism and abstraction. Archaeologists that study Paleolithic era humans, believe that the paintings discovered in 1994, in the cave at Chauvet-Pont-d’Arc in the Ardéche valley in France, are more than 30,000 years old. The images found at Lascaux and Altamira are more recent, dating to approximately 15,000 B.C.E. The paintings at Pech Merle date to both 25,000 and 15,000 B.C.E.