Arts of the Islamic world: The Later period - History of art
39
post-template-default,single,single-post,postid-39,single-format-standard,qode-quick-links-1.0,ajax_fade,page_not_loaded,,qode-title-hidden,side_menu_slide_from_right,columns-3,qode-product-single-tabs-on-bottom,qode-child-theme-ver-1.0.0,qode-theme-ver-13.1.2,qode-theme-bridge,wpb-js-composer js-comp-ver-5.4.5,vc_responsive 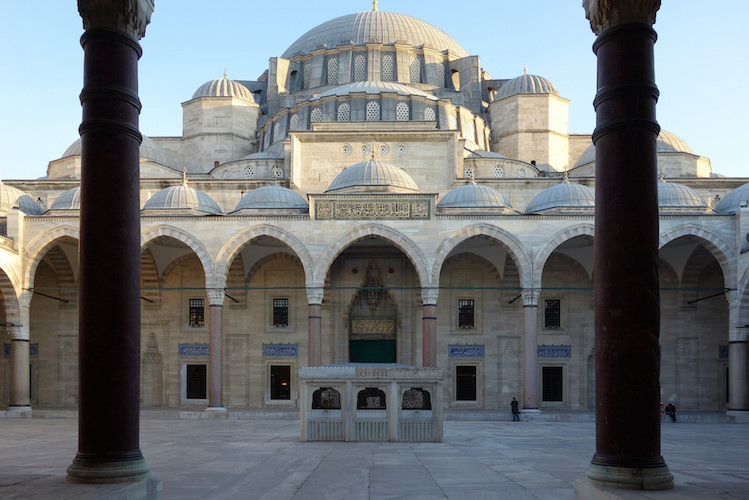 16 Dec Arts of the Islamic world: The Later period

Posted at 09:54h in Asia, Cultures, The Islamic World by artadmin 0 Comments
0 Likes

What does the Taj Mahal have to do with the Tamerlane? What do Persian carpets have to do with Turkish tiles? Quite a bit, as it turns out. By the fourteenth century, Islam had spread as far East as India and Islamic rulers had solidified their power by establishing prosperous cities and a robust trade in decorative arts along the all-important Silk Road. This is a complex period with competing and overlapping cultures and empires. Read below for an introduction to the later Islamic dynasties.

At its earliest stages, the Ottoman state was little more than a group formed as a result of the dissolution of the Anatolian Seljuq sultanate. However, in 1453, the Ottomans captured the great Byzantine capital, Constantinople, and in 1517, they defeated the Mamluks and took control of the most significant state in the Islamic world.

While the Ottomans ruled for many centuries, the height of the empire’s cultural and economic prosperity was achieved during Süleyman the Magnificent’s reign (r. 1520-1566), a period often referred to as the Ottoman’s ‘golden age.’ In addition to large-scale architectural projects, the decorative arts flourished, chief among them, ceramics, particularly tiles. Iznik tiles, named for the city in Anatolia where they were produced, developed a trademark style of curling vines and flowers rendered in beautiful shades of blue and turquoise. These designs were informed by the blue and white floral patterns found in Chinese porcelain—similar to earlier Mamluk tiles, and Timurid art to the East. In addition to Iznik, other artistic hubs developed, such as Bursa, known for its silks, and Cairo for its carpets. The capital, Istanbul (formerly Constantinople), became a great center for all matters of cultural importance from manuscript illumination to architecture. 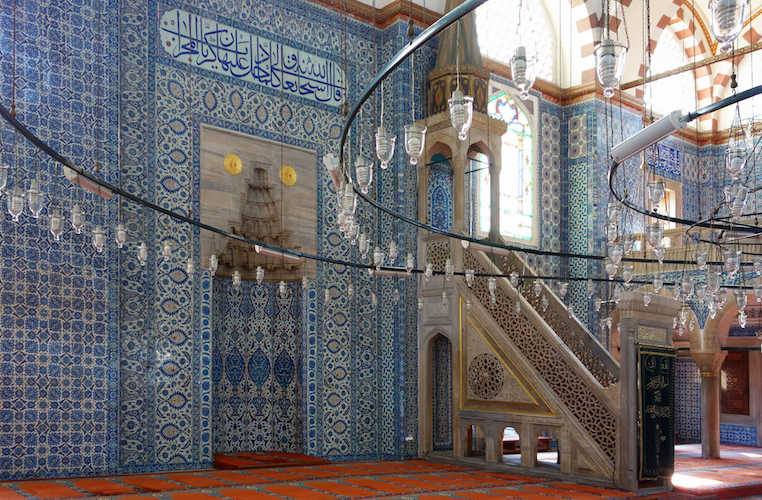 The architecture of the period, both sacred and secular, incorporates these decorative arts, from the dazzling blue tiles and monumental calligraphy that adorn the walls of Topkapi Palace (begun 1459) to the carpets that line the floors of the Süleymaniye Mosque (1550-1558). Ottoman mosque architecture itself is marked by the use of domes, widely used earlier in Byzantium, and towering minarets. The Byzantine influence draws primarily from Hagia Sophia, a former church that was converted into a mosque (and is now a museum). 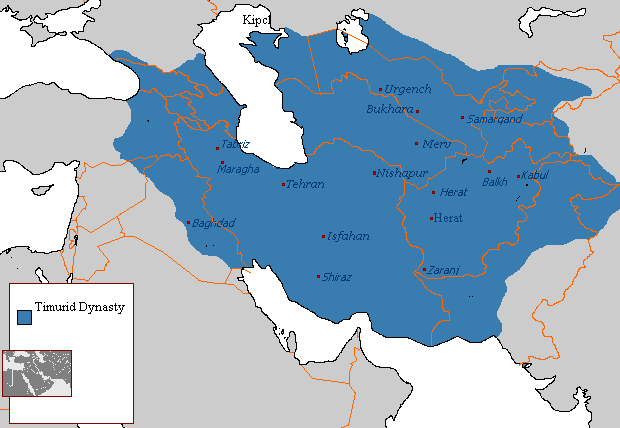 This powerful Central Asian dynasty was named for its founder, Tamerlane (ruled 1370-1405), which is derived from Timur the Lame. Despite his rather pathetic epithet, he claimed to be a descendent of Genghis Khan and demonstrated some of his supposed ancestor’s ruthlessness in conquering neighboring territories.After establishing a vast empire, Timur developed a monumental architecture befitting his power, and sought to make Samarkand the “pearl of the world.” Because the capital was situated at a major crossroads of the Silk Road (the crucial trade route linking the Middle East, Central Asia, and China), and because Timur had conquered so widely, the Timurids acquired a myriad of artisans and craftspeople from distinct artistic traditions. The resulting style synthesized aesthetic and design principles from as far away as India (then Hindustan) and the lands in between.